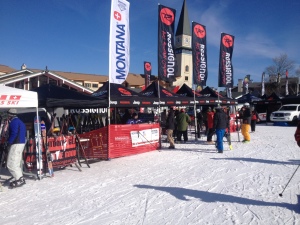 Our mission of discovery to the Stratton Mtn. on snow show provided us with three days of great skiing,a bonding opportunity for the staff, and a preview of next years gear. We were joined by special guest and friend Henri Borel owner of Chez Henri Restaurant in Sugarbush Village. Henri who is an avid skier in his eighties was on a mission to find a ski boot that he could get on and off easily. He discovered a boot called the Apex which is very similar to a snow  board type boot with a removable exo skeleton shell that fits in to any alpine ski binding. After a day of skiing and some bruised toes he was not dissapointed, and was fortunate to be given a pair for the remainder of the season. Highlights for next year were the DYNASTAR CHAM series for Women, three great colors available in width’s of 87, 97, and 107, with super light and strong Pawlonia wood torsion box construction in length’s starting at 152cm all the way up to 184cm. ROSSIGNOL  had some momentum going with their new S series skis and the new air core technology that lightens the tip and tail  making all width’s even more quick and nimble. ELAN was showing off the new  Spectrum Amphibio all mountain ski’s in width’s of 95mm and 105mm. The 95 is available in an all wood core or wood / titanal. Both were a lot of fun and held their own on the hard groomers.  HEAD as usual was as solid as always in all categories, especially the chip technology “KERS” skis (Kinetic energy recovery system). Generally the graphics for next year seemed to be a little more subtle and toned down than in the past so our ski wall should once again be looking very sharp. Hard to believe the gear can get any better but it is!! Think Snow. &nbsp;

This entry was posted in Featured News. Bookmark the permalink.
← The Stratton Show
SJ GRUNDON Her 2013 freestyle season at a glance. →